Come socialize with us!

Russound in the News 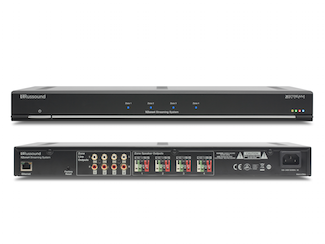 Russound is now shipping its XZone4 Four-Stream, Four-Zone Audio System, which is designed to offer Russound installers a single-box package featuring simple browser-based configuration with a smartphone, tablet, or laptop.

The new model, which was announced at CEDIA 2015 and is part of the company’s expandable XStream series, is engineered specifically for custom professionals and their clients.

The new model, which was announced at CEDIA 2015 and is part of the company’s expandable XStream series, is engineered specifically for custom professionals and their clients.

“The XZone4 is consistent with our approach to including installers in the product design mix,” said Charlie Porritt, CEO of Russound. “They told us that they needed a simple streaming solution that is scalable, easy to install and configure, with intuitive operation. The XZone4 incorporates their recommendations, with an additional benefit that our customers asked for the most: keeping it off of the internet through the Russound Certified Installer program.”

Engineered for integration and scalability, the XZone4 is a 1U rack-mountable component offering four independent audio streams (including one independent Apple AirPlay stream to each zone) that support up to four rooms of audio in a home or business, and can scale up to 16 total audio zones by linking up one or more of the other XStream series products.

Like all components in the XStream series, the XZone4 works with the MyRussound App for iOS/Android phones and tablets. They are also fully compatible with the XTS wall-mounted touchscreen interface, allowing for control of up to 16 stereo audio zones in a single installation using any combination of XStream series audio products.

Also, similar to other advanced Russound products, XZone4 is included in the Russound Certified Installer (RCI) Program. “RCI Required” models boast a recently introduced feature designed to drastically reduce unauthorized online sales of the company’s products while ensuring that consumers receive the benefits of working with certified installation professionals. To date, more than 5,000 Russound installers have taken part in the program.